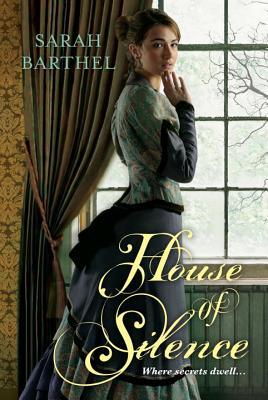 In the setting of Oak Park, Illinois, 1875 young Isabelle Larkin’s future seems to be set. She is engaged to the very handsome, charming, and politically ambitious Gregory Gallagher.  Isabelle envisions her happy future to be one of  a grand house, becoming an important political hostess and filling her home with wealth and beautiful children.  But then she witnesses a murder of a young maid being strangled by her very own fiancé.  When she tries to tell her mother and the doctor who cares for her, no one wants to believe her, and worst of all her mother continues to insist that she go through with her marriage to Gregory who denies it all.

Fearing for her life, Isabelle thinks of only one escape, she will pretend a mental breakdown that renders her mute and forces her mother to whisk her away to the Bellevue sanitarium.  After many episodes of trying to convince the doctor that she is indeed unstable and not ready to be released Isabelle does make the acquaintance and friendship with a fellow patient, Mary Todd Lincoln who was committed years after her husband’s assassination.  After a time, Isabelle and Mrs. Lincoln become unlikely allies where Isabelle is able to share her secrets, she must still continue her charade of mentally unstable because her mother refuses to give up her dreams of Isabelle marrying Gregory.

*** The threads of real life and fiction woven together made HOUSE OF SILENCE a fascinating read and the details of what life was like in the Bellevue Sanitarium were quite interesting – much different than what I expected and yet so much more.  Where I expected some of the cruelty and inhumanity associated with mental issues in the early century, Bellevue was like a rest home with assigned tasks to try to keep the patients relaxed. The author gave enough of background information  for some of the other patents that made this even more of story than just Isabelle trying to stay hidden and alive away from Gregory.

However, in the end it was a real thrill with edge of the seat action as the madness of Gregory came to the forefront and the reasons for it became exposed.   Bottom line:  HOUSE OF SILENCE was a truly interesting and well paced book that kept me up until the wee hours.