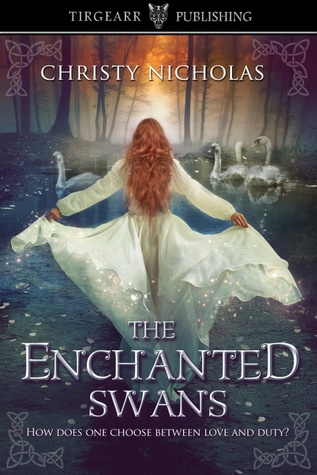 In pre-Celtic Ireland, Fionnuala, a fae princess, born in a loving household to a kind king and his beloved queen was born to a life of luxury.   She knew her duty loving her family and adoring her parents.  Unfortunately, at the age of ten, her mother struggled and died in childbirth leaving Fionnuala, her brother Aed, and now, newborn twin brothers to care for.  Fionnuala’s father was completely devastated and withdrew from all who cared for him including his children.  He went from completely withdrawn to bouts of rage over losing his beloved wife.

Fionnuala was worried about her father but was strong having promised her mother to care for her brothers.  Eventually the high king issued a proclamation that her father would have to choose a bride from one of two step-daughters of the king.   Not only that but the daughter who was not chosen by her father would be wed to the young man Fionnuala had set her sights on.

Not only were Fionnuala’s dreams ripped from her by these proclamations but the woman to whom her father married turned into a vicious viper and threw a curse upon Fionnuala and her brothers -– turning them all into swans.  Their stepmother was caught and would not cancel out the curse but for another time penance of 600 more years, she would allow them to speak in their normal voices.

The story then follows the swans lives over the next 900 years, through all their ups and downs, learning to live as swans along with the royal retainers who lived near their watery home in order to care for them and keep them safe.    Naturally, the story covered so many issues of trying to live within the confines of each body of water they were attached to.  The writing was very good although some of the names and terms used slowed down the pace as I tried to pronounce the words in my head the story was interesting.   THE ENCHANTED SWANS was original, but after all the trials and tribulations they lived through for 900 years the ending was a terrible let down.