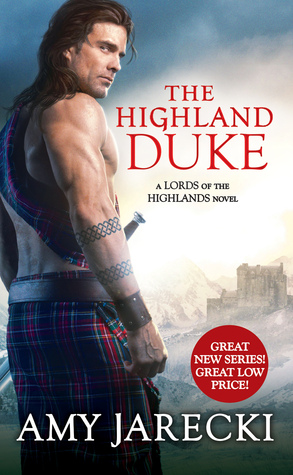 Akira Ayres was a healer above all else and when she happened upon a brawny Scot with a musket ball in his thigh, Akira had no doubt she must act to save him.   Even though the hated English were closing in on them Akira could not let another man die for not being brave enough to tend his wounds.   Even as Akira does her best to ease his pain and help him out she was definitely intimidated by the fearsome and huge brutally handsome highlander who refused to tell her his name.

Geordie knew that if Akira ever knew he was the Duke of Gordon, both of their lives would be forfeit.  The only way to keep her safe was to keep her by his side day and night.  However, the more time he spent with the sassy lass, the harder it seemed to let her go.  Despite the difference in their social standing Geordie was determined to make Akira his.

***  Again this is a new author to me and don’t you know I am just going to have to put Ms. Jarecki on my author watch list.   I really enjoyed THE HIGHLAND DUKE with its fast pace, great writing and and  wicked good dialogs.  I wasn’t always happy with Geordie assuming that his elevated status was insurmountable to making Akira an honest woman – I understood it – I just didn’t like it!

There were a lot of scenario’s where Akira was captured and released – some of them were even quite humorous but most were not.  However each attempt to free Akira was devilishly clever and the entrance of Akira’s Uncle Bruno was for me one of the highlights of the hit and run scenario’s found in the book .

Bottom Line:   Don’t be afraid of new authors – Ms. Jarecki’s THE HIGHLAND DUKE brought me a lot of pleasure and I highly recommend to fans of Scottish Historicals!