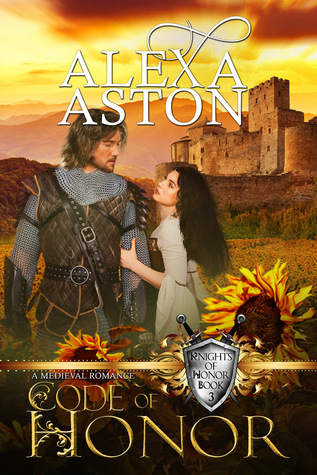 In a bold and horrific beginning the Earl of Sandbourne banishes his supposedly unfaithful wife to a convent. After trying to stop his father from striking his mother again, Michael was beaten back by his father, whereby, he jumped on his horse and swore to never return home until his father was dead and he could restore his mother to her rightful place of honor as the countess.

Fifteen years later, the newly knighted Sir Michael Devereux serves Lord Geoffrey de Montfort at Kinwick Castle.   Asked to organize the honor guarding for Lord Geoffrey and his family as they traveled to visit Lord Geoffrey’s sister and attend the wedding of their niece Michael was thrilled and honored to be chosen.   Michael unknowingly falls in love with a horse-mad maiden he helped to foal a mare and assumed she was part of the stable workers.

Lady Elysande is furious at her step-father for not listening to her pleas to call off her betrothal which was made when she was but a child.  As her wedding day approaches, she is full of dread especially as she has also fallen in love with the honorable knight who helped her foal her mare.  It almost seems like fate has intervened when she hears that her betrothed died on the way to the wedding, but unfortunately, his aged father plans to step in and take over for his son.

***   I have to say I really enjoyed this story, to only because I have been following along with the, Knights of Honor series, but because each book in this series had wonderful characterizations which made me fall in love with the characters.

Just when you thought the Elysande’s problems were over along comes this beast of a supposed father-in-law who after burying his only son wanted to jump in and marry his dead son’s betrothed! The events  leading up to the show down between Elysande and her step-father and finally her mother’s support still made you think all would be well.   But, there was more in store for these ill-fated lovers and some really neat surprises as well.