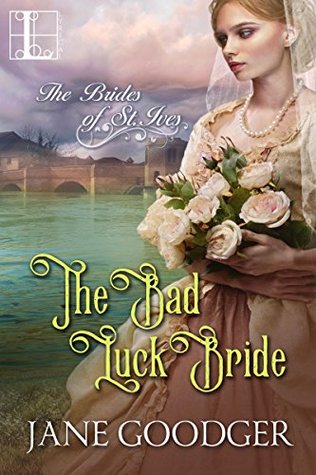 It’s bad enough when a bride waits for a groom who ultimately never shows up for the wedding vows, but when it happens for the THIRD time, said bride now gets dubbed “The Bad Luck Bride”.   Lady Alice Hubbard has had enough – frustrated and subdued Alice returns to her family’s estate in St. Ives and is now determined to accept her lot in life – as a doting spinster.   Although to her great surprise, an old friend Henderson Southwell shows up.  Henderson was not only her deceased brothers BEST friend, but Henderson had been Alice’s secret and cherished love. Henry as only Alice called him, the person Alice had held in her heart since the day she met him.

When Alice’s brother Joseph had died, Henderson was devastated blaming himself for not being with him the night most thought he had taken his life.  Henderson was so upset, he then left directly after the funeral and no one had heard from him until he showed up at Alice’s wedding claiming he was there to ‘stop’ her from marrying.   He knew that her family would never accept him because of his lack of aristocratic blood but somehow he knew that eventually, Alice would be his.

***   THE BAD LUCK BRIDE was a good read with crisp writing and an interesting fun plot that I quickly became immersed in the story.   Alice and Henderson had virtually grown up together since Joseph and Henderson had formed a close bond during their school years.  Henderson was welcomed into the Hubbard household and was treated like a member of the family, but once he showed his attraction to Alice the family gathered round and let him know how inappropriate his intentions toward Alice were.   After all, he was illegitimate with no real claim to any type of aristocratic background.

Naturally, Alice didn’t see it that way but then who shows up but the errant groom who now wants to make amends and beg for Alice’s forgiveness.  What does one do, when faced with following your heart or following the wishes of your beloved family?

Bottom line:  THE BAD LUCK BRIDE was a good start to a new series as I discovered a new author to me.   I enjoyed Goodger characterizations of Alice and Henderson, and actually came to like Alice’s previous suitor who kind of grew on you after a while.  Couple that with a little bit of a mystery regarding Joseph’s supposed suicide and several other accidental deaths and it leant another layer to a very nice romance.