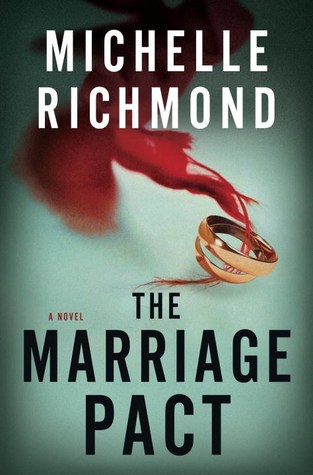 Okay, THE MARRIAGE PACT is definitely a WOW book – total psychological suspense and then some!  It asks the question, “How far would you go to protect your marriage?”

In this page-turner you have two newlyweds, a picture-perfect couple today, after growing out of some very definitive free-living younger days.  Alice was once an up-and-coming singer with a band and had an album or two.  Now she is a successful lawyer whose future seems quite bright.  Jake is a partner in an up-and coming Psychology practice.  For both the future looks enormously bright.

As a marriage gift from one of Alice’s prominent clients Alice and Jake are invited to join an exclusive  and secret mysterious group known as the Pact.  Seemed harmless enough with it seemed one goal – to keep their marriage, fresh, intact, and loving forever.   Who wouldn’t want that?  The rule book also contained other things as well with some of the rules not necessarily alarming at the time but as their lives and “Friends” they were introduced to at glamorous parties Jake and Alice began to feel as if they had made a huge mistake.

The tension was quite palpable and Jake and Alice started to think of ways out, particularly after Jake was warned by a former colleague who told him disturbing truths of how the Pact dealt with those who wanted ‘out’.

One thought on “Review: The Marriage Pact by Michelle Richmond”