Talk about dysfunctional family and mystery melding into one thrilling page-turner then you really must pick up LULLABY FOR MY SISTER.  One hears about atrocities like this but in our society, one assumes the bad step-mother would be more like the one  found in Cinderella.

Since the death of their mother Valentina Mancino, age 9,  had been her little sister Lucy’s protector and guardian since her father had taken to drink and left all responsibility on Valentina’s small shoulders.  Fifteen years later Valentina has achieved her goals of a rising career.   Valentina still watches over Lucy, who has issues and no goals in life.

In an attempt to help Lucy become a bit more self-sufficient Valentina hires a carpenter to remodel their childhood home into a profitable multi-family whereby Lucy could live off of the income, or at best sell the property and get a great price due to it’s location.

When the remodeling began, Valentina comes across an old suitcase containing a blood- stained childs dress leading to a trail of secrets that will have the reader pretty much shocked with the twists that come up once the secrets are exposed.

Written in flashback mode one can follow the story and get some idea of the horrors Valentina lived through during her childhood all the while doing her best to protect her little sister.   All in all this was a deeply moving story, with a final twist that I never saw coming.

Orphan of the French revolution and sometime British intelligence agent, Severine de Cabrillac has attempted to leave her life of spying behind her.  Now she devotes herself to investigating crimes in London and finding justice for the wrongly accused.

Raoul Deverney, an enigmatic half-Spaniard with enough secrets to earn even a spy’s respect, is at her door demanding help. She’s the only one who can find the killer of his long-estranged wife and rescue her missing fourteen-year-old daughter.  After much debate Severine reluctantly agrees to aid him, even though she feels the growing attraction between them makes it quite unwise. Their desperate search for the girl unleashes treason and murder. . . and offers a last chance for two strong, wounded people to find love.

*** I have been a long-time fan of Ms. Bourne’s Spymasters series and have quite enjoyed each and every one!   Obviously BEAUTY LIKE THE NIGHT ended up in a class by itself!  The two main protagonists while attracted to one another, started out terribly opposed to working together, in fact not quite trusting one another.

Raoul was a tough character to embrace, caustic and arrogant, it was hard to embrace him even as later he did seem a bit more likable.  Not that Severine was easy to get close to as her life had been unusual and she had learned not to give her trust to just anyone!   Although once they did agree to combine their intelligence, they did work well together.    What made the story even better was the search for Raoul’s missing daughter (whom he denied vehemently that he was not the father).   In trying to discover what was going on once they discovered that they needed to stop an assassination, the action deepened and it was edge of the seat reading while they tried to catch the assassin.

Bottom line:  The story was totally engaging and the ending was wonderful if not surprising.  Highly recommended. 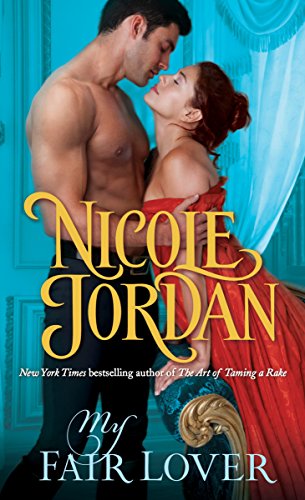 Lady Katherine Wilde believes she has overcome any romantic feelings toward Brandon Deverill, who rejected her six years ago. Now that the rogue needs polishing to claim his title and inheritance, she’s willing to strike a practical bargain: Kate will mold the brash privateer into an acceptable English nobleman if Deverill will safeguard her from brigands on a voyage to recover lost family treasure.

Brandon had often thought of the day he turned Kate away from his bed all those years ago. Even a rake such as he couldn’t seduce an innocent beauty before sailing into battle. But now that he’s inherited a title and must take a suitable bride, it is Kate he sets his sights on.  Brandon never grew up in a home with love and the notion of love was something he’d never before experienced.  However, Brandon soon realizes he’d gladly trade his life to save a woman who has captured his heart.

***  Nicole Jordan and her ongoing series of Legendary Lovers has been both a success for her and brought extreme enjoyment to me.  While I appreciated the banter and the seductions I did feel something missing and that would be just a bit of suspense with something more to overcome than just Brandon not realizing his feelings for Kate as love.

The contretemps with the pirate Louvel was and should have been expanded to a much higher level rather than the small tiff it seemed to represent.  Other than that the seduction was sublime and and sensuality irresistible.

Josie Buhrman has for the last ten years hidden and trying to escape the dysfunctional and tragic family she grew up in.  After her father’s death and her mother’s abandonment to run away and join a cult leaving her and her twin sister Lanie to live with an Aunt, life had never been the same.   Lanie, her other half did a one-eighty and spiraled out of control getting int all sorts of trouble, but what truly blew the closeness the twins once had was a betrayal Josie simply could not forgive.

Now, Josie has finally put down roots in New York with the love of her life, best friend and live in partner Caleb.  It’s taken a long time for Josie to develop the kind of close attachment she has with Caleb, but when a phone call from her cousin comes thru begging Josie to come home for her long lost mother’s funeral, her first though was that her carefully constructed life of lies was finally going to have to be explained.

An investigative reporter Poppy Parnell was running a ‘True Crime’ episode of the murder and supposedly false imprisonment of the person who was charged with her fathers murder.  The podcast had become a hit and in an effort to keep Caleb from learn the truth she again lied and left for the mid-west in order to attend the funeral of the mother who abandoned her and her sister.

***  This was a really great read with characters i found to be pretty much fleshed out and eventually discovering all the secrets both twins had buried deep from the tragic night of their father’s murder.  I’m sure a psychiatrist would delight in reading this tome for great examples of how one buries trauma from their mind.

The story was fast paced and very interesting with a plethora of high emotions, blame, betrayals and mental instability.   Bottom line is that this was a very enjoyable read .