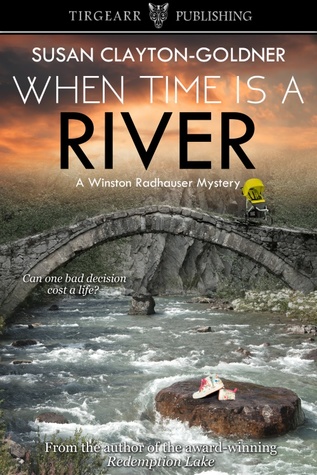 Because I’ve read the National Writers Award Winner Book  A BEND IN THE WILLOW by Susan Clayton-Goldener I was more than happy to be able to read and review her newest book WHEN TIME IS A RIVER.    Now that I have read both, I know that with this author, who writes with heart and emotion and a very fresh and eloquent voice, she is an author who must be placed on an auto-buy list.

The dynamics of the family that had Emily their 3 year old child kidnapped from a park, while her much older step-sister Brandy was in charge of  watching her certainly played a huge part in the intense emotional play of the story.   Yes, Brandy was not on the best of terms with her new step-mother who was once her professor father’s student and only 4-5 years older than Brandy, but that was never a factor in what Brandy felt for her baby sister.  Brandy was probably more of a mother to Emily than Christine (the mother) was.

Unbeknownst to Brandy, was that she and Emily had been stalked for weeks by someone who wanted Emily – the perfect child.   Brandy was quite beautiful and talented but for a noticeable scar on her cheek which she’d received when she fell out of her stroller at age 3 and was caught in the escalator at a department store.    The trauma was intense for Brandy because all her life she wanted to be an actress and singer.  But when Emily disappeared from her stroller while Brandy was in a restroom keeping an eye on the stroller wheels and talking to Emily, the stalker came in and took Emily right out of the stroller without Brandy ever knowing she was gone.    This incident trounced any kind of trauma Brandy had ever had over her scars.  Enter Detective Radhauser who is brought in on the case, and insists Brandy stay out of the investigation – however, Brandy’s tortured soul and guilt wouldn’t allow her to just sit around.

With the story set, be aware that the pages will fly by as Brandy chases down every clue she gives to Radhauser.   Radhauser insists Brandy stay safe and away from the investigation but Brandy wouldn’t listen and when she discovers more than she ever wanted to know, she must race before it was too late to save Emily.