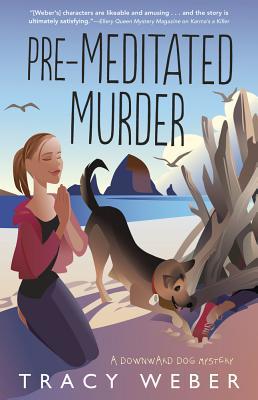 PRE-MEDITATED MURDER is the fifth book in Tracy Weber’s Downward Dog Mystery series. I haven’t read the earlier books but suggest that you read it in order if spoilers are an issue. In fact, the entire plot of PRE-MEDITATED MURDER hinges around a huge spoiler for the relationship between the main character, Kate Davidson, and her boyfriend, Michael.

Kate is expecting Michael to pop the marriage question to her at the expensive birthday dinner he has arranged for her. After all, her best friend, Rene, saw him exiting a jewelry store with a purchase in hand shortly before the big night. Unfortunately, their entire relationship is about to come into question as Kate will have to use all of her yoga calming skills once she finds out Michael has a secret… he’s already married and his estranged wife is demanding a huge sum of money for the divorce! Things only worsen when Kate and Michael try to work things out with Gabriella and she turns up dead, murdered with Michael being the primary suspect. Can Kate uncover who Gabriella’s murderer is? And will their relationship survive?

Admittedly, it’s hard to get thrown into the middle of a crisis in a relationship with characters you haven’t met previously and appreciate the emotional struggle they are undergoing. Tracy Weber, however, does a marvelous job at drawing readers into the heart of the dilemma.  Kate’s emotional anguish is palpable from the opening pages as we watch her excitement turn into horror when she realizes Michael has been lying to her.

And oh, how can I not mention Bella, the slightly neurotic German Shephard with separation anxiety? I loved her antics, from her hatred of beards to her protectiveness of the overexuberant toddler she meets. I want to read more of the Downward Dog Mystery series if only to see more of Bella!