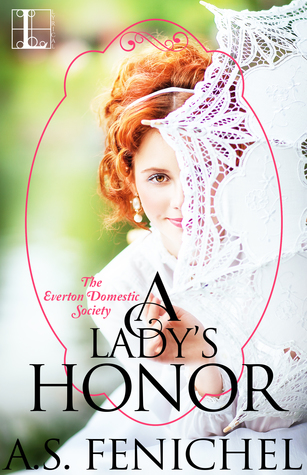 REVIEW:  Phoebe Hallsmith doesn’t regret the years of caring for her ailing grandmother.  No, discovering that the man she was once betrothed to turned out to be a rat-bastard doesn’t really bother her as well; so all in all Phoebe is more or less resigned to ‘spinsterhood’.   She has disappointed her parents and her brother has disowned her since she is now working as an employee of the Everton Domestic Society of London.  Phoebe generally doesn’t accept positions where she is acquainted with the client, but upon a special request she agrees to try and sort out the chaos of her best friend’s grieving husband’s life – Markus Flammel.

After Markus’ wife Emma passed giving birth to a beautiful baby girl he’d been drowning his grief inn a bottle.  Not even his toddler daughter can bring him  any form of happiness.  Phoebe who had been best friends and missed Emma was not about to let Markus get away with drowning his sorrows and neglecting his daughter – not if she had anything to do with it!

***  Again, I have been enthralled and moved by a book! I will also confess that I was originally drawn to this book by the luscious cover art and was thrilled to find that the beauty of the cover translated into a beautiful story as well!  Lucky me!!

Phoebe had known how much her friend Emma loved her husband, although she herself didn’t have that much interaction with him. However, knowing Emma, she knew that only a good, honest, and honorable man could have had her friend so mush in love.   For the sake of Emma’s beautiful daughter Phoebe would fight tooth and nail to bring Markus back to the living.  Once Phoebe convinced Markus to stop drinking and look at his daughter, she began the long process of bringing his estate back to rights and letting him discover the joy of loving the precious gift of his daughter that Emma left behind.

With a few twists and turns from an old beau and a new conquest, Phoebe now had to examine  her heart and decide if falling in love with her best friends widowed husband was the right thing to do.  Also, was Markus ready to move on as well?

One thought on “REVIEW: A Lady’s Honor by A.S. Fenichel”