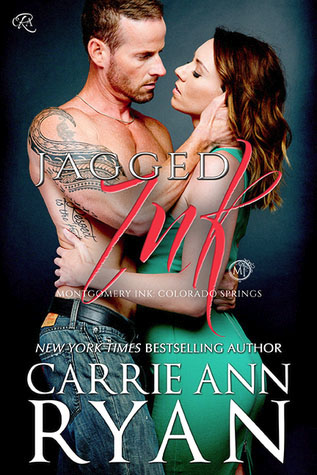 In Jagged Ink, author Carrie Ann Ryan, reminds her readers that sometimes happily ever after is hard work. The fairy tale offered by many authors is a fantastic escape, but Ms. Ryan hits us with real life.

This is a bit of a reverse read. The fairy tale starts with the couple, Roxie and Carter, as a married couple who expected to exchange their vows and move on in a haze of perfection. Life got in the way and this book hit every emotional soft spot possible.

Jagged Ink also gives a lot of really good advice on marriage. It really takes communication and love. I have to admit that there were a few times I wanted to yell at them to sit down and talk! So much should have been said but in Roxie’s case, I can understand her internalizing her thoughts and fears. Sorry, but you will have to read to find out why she feels what she does.

Ms. Ryan has an amazing talent for knowing what people think and feel and putting on paper all the fears, anger and misunderstandings and bring about a true HEA.

I have recently become a great fan of Ms. Robards and know without reading a review what to expect.  Fabulous intelligent writing, awesome character building, fast action, and truly bad-ass villains, whom you simply cannot wait for them be found out and dealt with!  Often times as in SAY YOUR SORRY, you may even feel some compassion for the villain based upon what factors led them to conduct such heinous crimes.

FBI Special Agent Gideon Reynolds has tried to put his past behind him. He escaped the violence of a cult upbringing when he was just thirteen, and since then routine and discipline have been his way of making sense of the world. But when a friend calls to show him a piece of evidence from a young woman who fought off an attacker. With that Gideon’s  world was about to come to a screeching halt!

Daisy Dawson has had more than her fair share of pain – but she’s done being a victim and a prisoner. Brave and determined, Daisy is not going to let anyone take away her independence again. However her newly appointed intensely dark FBI investigator and bodyguard is certainly appealing to her passionate side.

Soon it appears clear that Daisy’s attack was just the beginning when bloodied bodies of young women are showing up all over California.  As Gideon and friends work to find the killer, it’s clear that Daisy is in more danger than they ever realized.

***  As an introduction to Ms. Robards newest series opener, you are introduced to a whole new plethora of family which I am sure will play central roles in this new series.  I love how Ms, Robards invites you into loving family scenario’s to a place to feel safe, when all around you the villains are spreading horror and hatred.   As the intro to her new series SACRAMENTO – I personally cannot wait for her to hurry up with the next books in this run.   Love and highly recommend!